We’re going to review how you cook spareribs on a gas grill for those that have never done it. But for your gas grillers out there, you’re going to learn something new today called low and slow cooking.

Gas grills were designed to cook at relatively high temperatures, quickly and with no thought toward moisture retention. So that’s going to be a problem we need to overcome on your gas grill. That’s because we aren’t going to be cooking ribs hot and fast. You can if you want, but you’re here because you wanted to know how to cook spareribs on a gas grill. And I’m going to tell you. So listen up!

First of all, you’re going to need to cook using indirect heat. On a grill that means not using all the burners. For instance, on a 3 burner, you might use the far left burner on low and cook to the right. With 4 and 5 burners, you have a few more options that I won’t itemize for you. But, if you want to get it perfect then you should set up a way to deflect the heat using the center burner.

Deflecting the heat is going to require a modification. Now, you can use some sort of cast iron plate or griddle to do this, or you can use heavy-duty aluminum foil. Nothing will be perfect. The key is to deflect the heat left and right so the distribution is as even as possible. You’ll have to remove the center grate(s) to put this deflector in.

Ribs require a good rub. My preference is the recipe for the best ribs in the universe. I’ll let you look that one up on your own. Dust your ribs generously and then place them on the grill. One on the left side, one on the right side, and if you need more room, you can use the warming rack.

Now, the proper temperature to cook any barbecue at is between 200 F and 250 F. Cooking spareribs on a gas grill is no different. Most likely, you’ll have a hard time keeping your gas grill at temperatures this low. It depends. On my 3 burner, it’s nearly impossible to get below 300 F. So you’ll have to watch your ribs closely.

To get the smoke, you’re going to need to add wood chunks or chips. I generally use chips on the gas grill, but chunks will work fine too. Don’t worry about soaking them. Let the ribs cook without opening the hood until the smoke is gone.

One thing about smoking is that there is a point where it no longer takes, so most of the smoke is achieved in the early part of the cook. Don’t worry about constantly adding smoke wood.

Now you can add a roasting pan of water and set it on the middle grate above the deflector modification. Make sure you check the water level after an hour or so. Add more if needed. The water will help to control the temperature since it boils off at 212 F. It will also help keep moisture in the grill so the ribs don’t dry out.

Spareribs on a gas grill, or any grill or smoker, will take about 4 hours at 225 F. So, at the beginning of the 4th hour is when you may want to start basting. Some use a watered-down BBQ sauce, while others like to spray apple juice on them. I like apple juice myself.

Just make sure that if your gas grill is running closer to 300 F that they aren’t done in the third hour. When they start showing more bone, and they the ribs begin to tear off easily, they’re done!

When you take them off the grill, I like to cover them with foil for 10 minutes before cutting into them. It’s also a good time to put a coating of your favorite BBQ sauce on. If these are done right, you should enjoy them without the BBQ sauce too. 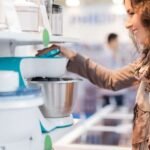